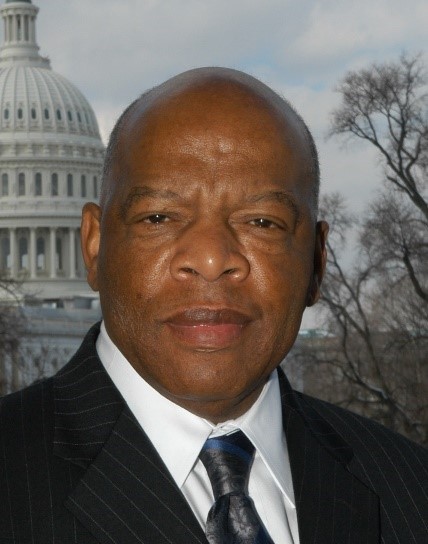 Civil Rights Activities and U.S. Representative John Robert Lewis passed away on Friday, July 17, 2020 at the age of 80 from Stage Four pancreatic cancer. He dedicated his life to protecting human rights, securing civil liberties, and building what he called “The Beloved Community” in America.

Born the son of sharecroppers on February 21, 1940, outside of Troy, Alabama, John grew up on his family’s farm and attended segregated public schools in Pike County, Alabama. As a young boy, he was inspired by the activism surrounding the Montgomery Bus Boycott and the words of the Rev. Dr. Martin Luther King, Jr., which he heard on radio broadcasts.  In those pivotal moments, he made a decision to become a part of the Civil Rights Movement. Ever since then, he has remained at the vanguard of progressive social movements and the human rights struggle in the United States.

As a student at Fisk University, John Lewis organized sit-in demonstrations at segregated lunch counters in Nashville, Tennessee. In 1961, he volunteered to participate in the Freedom Rides, which challenged segregation at interstate bus terminals across the South. Lewis risked his life on those Rides many times by simply sitting in seats reserved for white patrons.  He was also beaten severely by angry mobs and arrested by police for challenging the injustice of Jim Crow segregation in the South. During the height of the Movement, from 1963 to 1966, Lewis was named Chairman of the Student Nonviolent Coordinating Committee (SNCC), which he helped form. SNCC was largely responsible for organizing student activism in the Movement, including sit-ins and other activities. 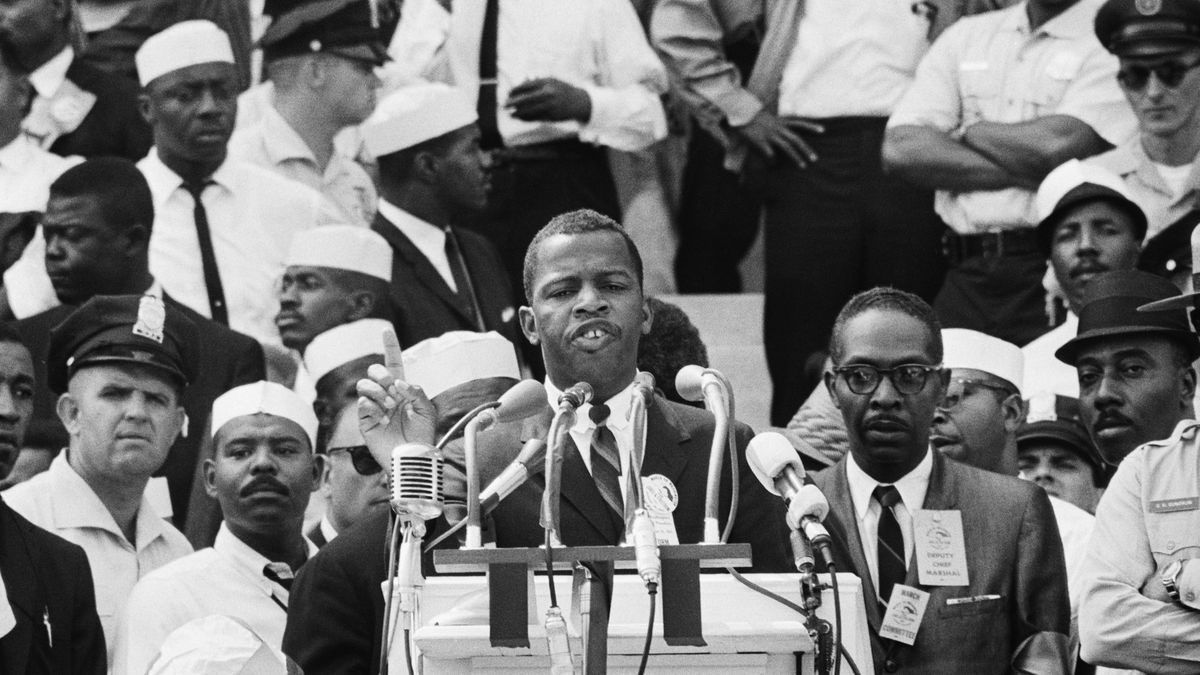 While still a young man, John Lewis became a nationally recognized leader. By 1963, he was dubbed one of the “Big Six” leaders of the Civil Rights Movement. At the age of 23, he was an architect of and a keynote speaker at the historic March on Washington in August 1963. In 1964, John Lewis coordinated SNCC efforts to organize voter registration drives and community action programs during the Mississippi Freedom Summer. The following year, Lewis helped spearhead one of the most seminal moments of the Civil Rights Movement.  Hosea Williams, another notable Civil Rights leader, and John Lewis led over 600 peaceful, orderly protestors across the Edmund Pettus Bridge in Selma, Alabama on March 7, 1965. They intended to march from Selma to Montgomery to demonstrate the need for voting rights in the state. The marchers were attacked by Alabama state troopers in a brutal confrontation that became known as “Bloody Sunday.” John suffered a fractured skull from a police officer’s club during the confrontation. News broadcasts and photographs revealing the senseless cruelty of the segregated South helped hasten the passage of the Voting Rights Act of 1965. 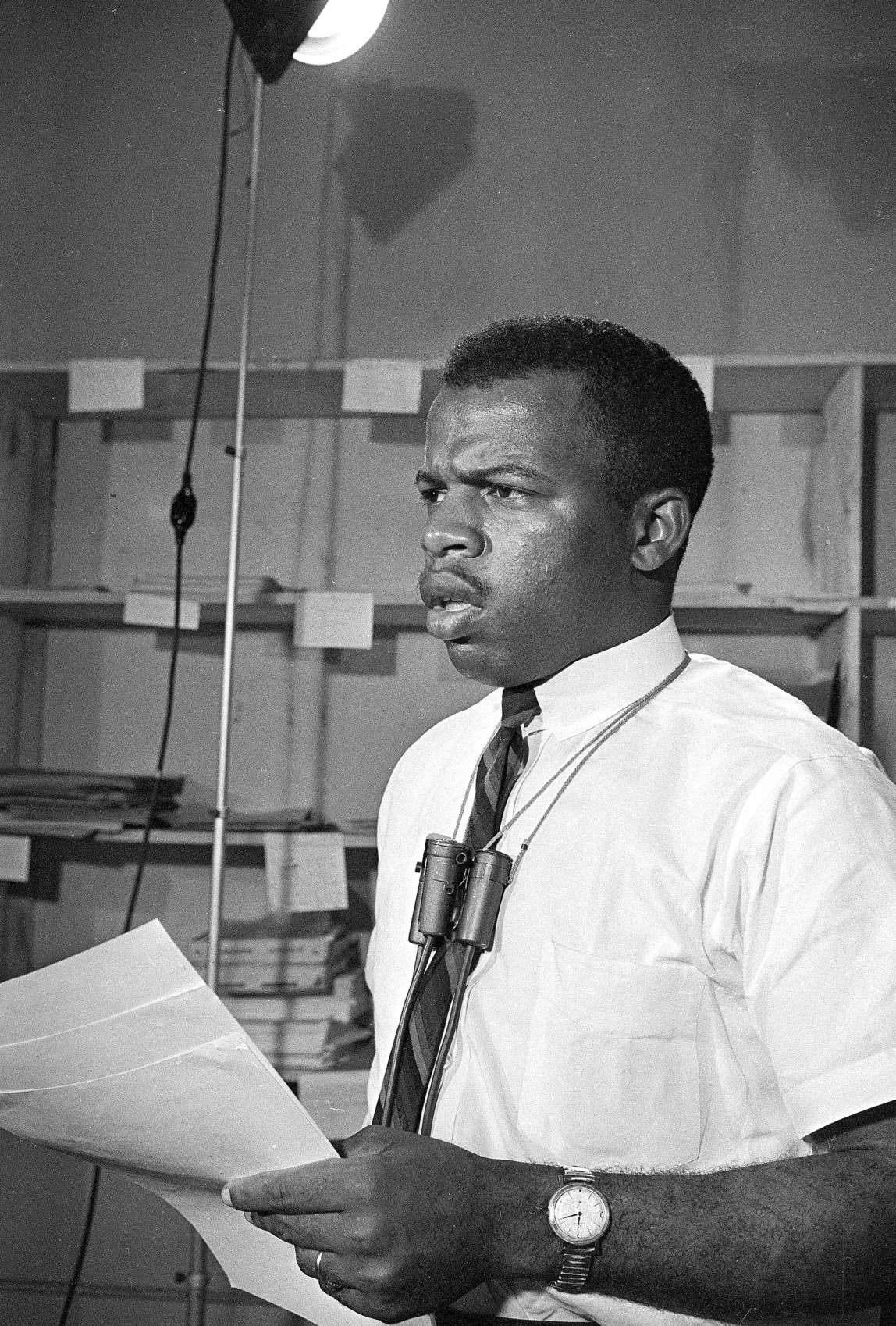 Despite more than 40 arrests, physical attacks and serious injuries, John Lewis remained a devoted advocate of the philosophy of nonviolence. After leaving SNCC in 1966, he continued his commitment to the Civil Rights Movement as Associate Director of the Field Foundation and his participation in the Southern Regional Council’s voter registration programs. Lewis went on to become the Director of the Voter Education Project (VEP). Under his leadership, the VEP transformed the nation’s political climate by adding nearly four million minorities to the voter rolls.

In 1977, John Lewis was appointed by President Jimmy Carter to direct more than 250,000 volunteers of ACTION, the federal volunteer agency. In 1981, he was elected to Atlanta City Council and to the U.S. House in 1986.While in Congress, John Lewis fought for liberal causes and opposed the 1991 and 2003 Gulf Wars. In 2016, he was arrested for the sit-in he led in the House demanding action on gun control after the Orlando, Florida, nightclub massacre.

John Lewis received numerous awards from eminent national and international institutions, including the highest civilian honor granted by President Barack Obama, the Medal of Freedom, the Lincoln Medal from the historic Ford’s Theatre, the Golden Plate Award given by the Academy of Excellence, the Preservation Hero award given by the National Trust for Historic Preservation, the Capital Award of the National Council of La Raza, the Martin Luther King, Jr. Non-Violent Peace Prize, the President’s Medal of Georgetown University, the NAACP Spingarn Medal, the National Education Association Martin Luther King Jr. Memorial Award, and the only John F. Kennedy “Profile in Courage Award” for Lifetime Achievement ever granted by the John F. Kennedy Library Foundation.

His biography, published in 1998, is entitled Walking With The Wind: A Memoir of the Movement. Written with Michel D’Orso, Walking With The Wind is a recipient of the Anisfield-Wolf Book Award as well as the Robert F. Kennedy Book Award. He is also the subject of two other books written about his life:  Freedom Riders: John Lewis and Jim Zwerg on the Front Lines of the Civil Rights Movement, by Ann Bausum and John Lewis in the Lead, by Jim Haskins and Kathleen Benson, with illustrations by famous Georgia artist, Bennie Andrews.

John Lewis will be missed by many and his legacy will live on for eternity.